How long would you drive to hike in the native forests of Ethiopia? When you live in Addis Ababa, where fresh air is becoming a commodity, a two hour drive seems like a fair tradeoff.  I had been meaning to take the family to Menagesha National Forest, ever since my walking partner suggested it. We were in the habit of walking atop Mt. Entoto in the city every week and I wanted a change of scenery. So Menagesha has been on my “to do” list for over 6 months now.  Saturday, we just decided to go — completely unplanned and unprepared. Luckily, my husband and skillful driver of Ethiopian terrain (and city traffic) agreed that it was, indeed, time to get to a slower pace.  And thankfully, the gas station had a supply of gas to fill our almost empty tank. We were on our way by 10:15.

That 2-hour Saturday morning ride rewarded us with the magic of Menagesha (Suba) forest. Once to Sabeta town, we turned onto a bumpy road that took us past dozens of agricultural fields and tukuls (traditional thatch roofed homes), that made us forget that we were just 30 kilometers outside the bustling city. It was so rustic and beautiful.  Kids pulled folks and supplies on horse drawn carriages. Cows meandered along the road.  Most people walked where they needed to carrying their supplies in gabis and babies wrapped in netelas  on their backs. It was a typical countryside scene. You could tell that in the villages around Sabeta,  at the base of  Mount Wechecha, people took the time to stay a while to drink coffee or chew chat at the invitation of friends. Children waved with smiling faces from their compounds on the side of the road.   We also saw many people lining up with yellow plastic jerry cans, which means that fresh running water is a scarce commodity.

Once in the forest, the hiking opportunities were endless.  The fresh air greeted us at the base of the mountain. After guessing our way to the main gate, we paid the entrance fee and were allowed to cross beyond the thin rope saddling the road (a.k.a “the park gate”). 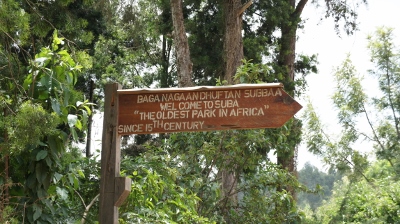 From that point on, the kids had a  ball. We let them ride in the front seat to get a front row view.  After parking, we hiked along the miles of well-defined trails.  Part of the fun was not really knowing (or caring) where the trails would lead to.  The kids meandered along, veering off every once in a while to pick up sticks, to investigate new plants and vines, or to try to figure out which animals made the huge tracks along the trails. 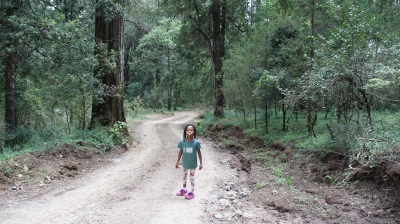 The kids have been learning about fungi and were excited about the possibility of spotting some mushrooms growing along fallen logs beneath the forest canopy. But even though we spent 3 hours in the park, we didn’t see a single mushroom. 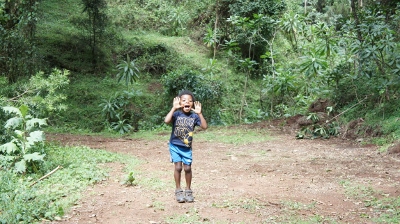 We did, however, spot 2 black and white colobus monkeys.  I can’t think of a better way to spend a Saturday.

A colobus monkey spotted in the tree tops